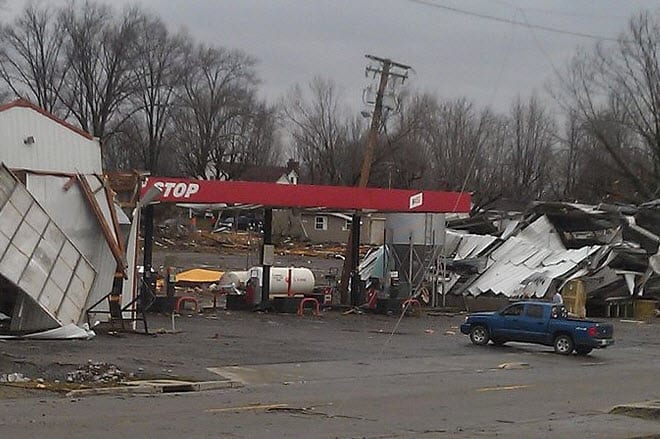 An outbreak of deadly and devastating tornadoes wrought havoc in many Southern and Midwest states over the weekend. The disasters began on Friday last week. The tornadoes struck a major blow to four states: Kentucky, Indiana, Ohio and Alabama. The people in these states had little warning of the storms, which manifested at an alarmingly fast pace. The tornadoes quickly grew in intensity and caused a significant amount of damage to everything in their path. When the winds finally calmed after hours of fury, approximately 33 people were found dead.

These four states occupy an area of land that is infamously known as “Tornado Alley.” Violent winds are very common in this region, and the damage created by these storms is rarely modest. A veritable army of insurance agents and claims adjusters have come to the region to assist those that must file claims. Insurers have not yet released their estimates regarding the cost of the damage created by the storms, but are likely to do so in the following weeks.

The onslaught of tornadoes hit several towns in the four states that served as their host. Few others were hit as hard at Henryville, Indiana, which was wiped off the map. Indeed, as a town Henryville exists only as a name now, as there are no structures left in the wake of the storms. Despite the absolute destruction that befell Henryville, only 14 people lost their lives to the tornadoes that tore the town asunder.

Officials from the affected states will continue with the rescue and recovery effort, but they expect to see the death toll rise as more people are accounted for. For more live insurance news headlines.