Even if this substance is used medically through vaporizers or consumption, users are still deemed “smokers”.

Earlier in the summer of 2015, the Supreme Court of Canada ruled that patients in the country who have legal prescriptions for the use of medical marijuana now have the right to take it in any form, including consumption in food, teas, oils, or smoking, but those patients have been falling into an interesting category when it comes to their insurance rates, regardless of how the drug is used.

Many medical marijuana users have been deemed “smokers”, even when they don’t smoke the drug.

The life insurance rates that are being paid by these patients, therefore, are being sent skyward, more closely reflecting those of people who smoke tobacco products. When a life insurance policy application is completed, people who use medical marijuana in any method or form are now expected to indicate that they are smokers and must, therefore, pay a higher premium for their coverage as a result of that designation. According to the LSM Insurance director of marketing, Syed Raza, “To be honest, it really doesn’t make sense.”

The life insurance rates for smokers can be as high as twice as much as what non-smokers pay. 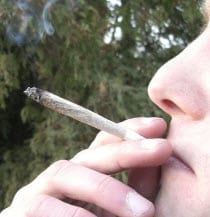 Medical marijuana users are being required to call themselves “smokers” on their insurance policy applications, even though using the drug through vaporizers or through the consumption of edibles has not been associated with the same kinds of risks as smoking. “So lumping them in with smokers doesn’t really make sense. And with the premium difference that a smoker will pay over a non-smoker, it’s just not right,” said Raza.

As a new entry into the Canadian medical environment, the specific regulations involved in the use of medical marijuana have not yet all been hammered out. A statement from the Life and Health Insurance Association to CBC News, via spokesperson Wendy Hope, had explained that when it comes to the users of this drug, they should be considered to be “similar to someone who is smoking, but that person is not necessarily classified as a smoker.” She could not provide any further detail beyond that description or on the way that insurance rates would be impacted by this designation.