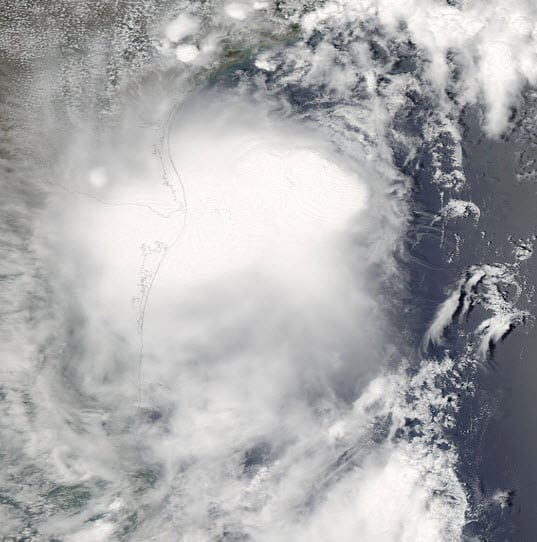 BOSTON, July 31, 2011– According to catastrophe modeling firm AIR Worldwide, Don, the fourth named storm of the Atlantic hurricane season, made landfall late Friday near Baffin Bay, Texas, as a tropical depression. Dry air and shear tore the storm apart such that its winds—tropical storm-strength as Don approached the Texas coast—weakened to roughly 35 miles per hour as the storm crossed ashore. As of 10 PM CDT Friday night, just after landfall, all tropical storm watches and warnings for Texas were discontinued.

On Friday afternoon, before the storm touched down, Rio Grande Valley—at Texas’s southernmost tip—began experiencing precipitation from Don’s outer rain bands. “Earlier in the week, as Don moved relatively quickly across the southern Gulf of Mexico towards Texas, it changed little in intensity, inhibited by the area of moderate vertical wind shear through which it was passing,” said Dr. Tim Doggett, principal scientist at AIR Worldwide. “Though it tracked near several areas where offshore oil production is conducted, it avoided the largest concentrations of production platforms, which lie south of New Orleans. Hence, no damage to offshore rigs was reported from Don in the Gulf.”

According to the 4 am (CDT) National Hurricane Center (NHC) Public Advisory on Saturday, Tropical Depression Don had maximum sustained winds of 30 mph and was about 85 miles west of Corpus Christi, moving west-northwest at 14 mph—a quick pace that will mitigate flooding.

While forecasters initially thought Don could bring as much as seven inches of precipitation to parts of rain-starved, Texas, rainfall will only be one to two inches in most areas, and three inches in isolated locations—certainly not enough to make a dent in the state’s severe drought. Parts of northern Mexico may experience rain as well. The region where Don made landfall, 40 miles south of Corpus Christi, Texas, is sparsely populated. Following landfall, there have been few reports of damage.

Due to the sparse population of the landfall region and Don’s relatively weak winds, significant insured losses are not expected from this event.