The increase in this type of damage is starting to make a mark on several of the state’s industries.

Although sinkholes have always been around, there has been a sudden increase in the number of homeowners insurance claims relating to their damage throughout Florida, causing engineers, scientists, real estate developers, and other experts at a difficult conflict.

Many believe that it is the activity of humans that is causing this spike in sink holes.

There are some geological experts that have stated that they feel that there is a growing amount of sinkhole activity in Florida because real estate developers are drawing a great deal of water out of the ground in order to build or to use the land for agriculture. Although it is the acid in the water that causes the holes in the limestone that makes up the ground in much of Florida, that same water is what has been providing support. By changing this balance, sinkholes form, cause damage, and lead to homeowners insurance claims. 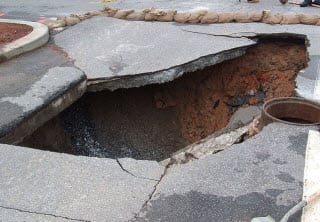 The homeowners insurance claims associated with sinkholes are often very high, compared to other claims.

When the acid in the water dissolves the limestone and leaves holes, it often fills those gaps, itself, providing some support. However, when the developers pump out the water, it leaves the holes empty. This year’s heavy rains soaking the top soil have caused increased pressure from above, collapsing the remaining support around the holes and causing the ground to sink. When a structure such as a house is located over that spot, massive damage – and therefore a large home insurance

This occurrence is becoming so common that it is beginning to pay a role in a few of Florida’s large markets. Homeowners insurance companies are finding that they are making more frequent payouts for this type of claim, and the recovering real estate market in the state is now beginning to face yet another barrier.

According to a real estate development expert in Florida, Peter Zalewski, this is not just a homeowners insurance issue. He said that “As builders are forced to go farther and farther out of cities in search of developable land, compromises such as building on less than ideal sites have to be made to deliver competitively priced properties.” He added that “We think this factor is only going to contribute to the sinkhole problem in the future on the Florida peninsula. At the end of the day, technology can only serve as a stopgap against Mother Nature.”