The pandemic has caused breeders and shelters to sell out, but some owners aren’t as covered as they think.

Dogs were among the sales booms to take off as a result of the pandemic, but many owners are shocked to discover that their home insurance coverage doesn’t cover their new pets.

There are certain breeds that many insurers simply will not cover for expensive liability claims.

As a result, if a dog bites someone or causes them injuries in another way such as by scratching them or jumping on them, depending on the breed, home insurance coverage may not be there to foot the bill. This is no small issue for some new pet owners, as the average dog bite claim is approximately $44,760, according to data from the Insurance Information Institute.

Not all insurers have a list of dog breeds that they won’t cover, but many do. This is an important factor to consider before adopting a new pet and bringing it home. Some insurers will include all dogs in their home policies, while others will consider a bite claim on a case-by-case basis. That said, for consumers bringing home a new furry friend, it is highly recommended that they have a look at the exclusions on their homeowners’ insurance policies to be sure that problems covered by the pooch are covered.

There are certain dog breeds that are more likely than others to be banned for home insurance coverage.

For instance, a recent Forbes Advisor report showed that among the 42 insurers across the country they found to have a banned breed list, Doberman pinschers, pit bulls (which include bull terriers, Staffordshire bull terriers, American bull terriers, and American Staffordshire terriers, as well as any combination among them) and rottweilers were on every one of the lists. Other breeds that are extremely likely to be on a banned breed list for insurers include chow chows, wolf dogs, wolf hybrid dogs, presa canarios (canary dogs), and akitas.

Depending on the insurer, many other common breeds may also be included on the list, though these are not on nearly as many: German shepherds, huskies, mastiffs, 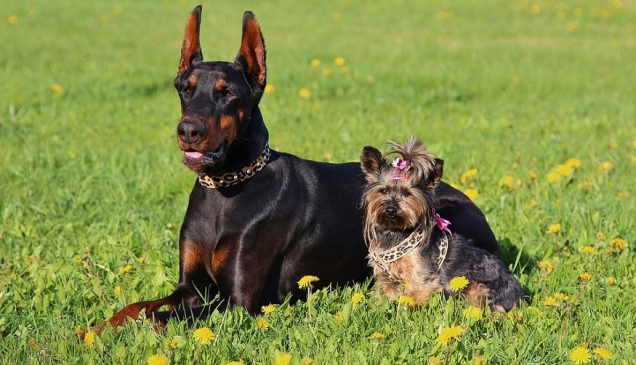 Financial experts recommend choosing home insurance that will cover any dog that will be living there.