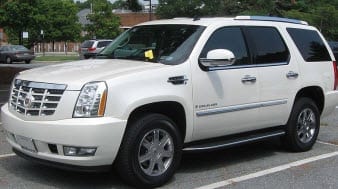 For the fourth year in a row, the Highway Loss Data Institute (HLDI) has placed the Cadillac Escalade at the top of its list of vehicles that are most likely to be stolen.

The institute has based its rankings on the claims data from auto insurance companies from 2008 and 2009. According to the HLDI, among the vehicles holding the top ten positions with the highest frequency of theft, eight are large vehicles from Ford or General motors, including trucks and SUVs. The remaining two on the list are different versions of the Chrysler 300 sedan.

Among the four Escalade types – each of which are common targets of thieves – it was the one with the pickup bed, the Escalade EXT, which was the most commonly stolen. One out of every 100 Escalades will either be stolen or broken into, according to the HLDI statistics.

The HLDI study examined the frequency of claims, which represents the number of thefts that are reported to insurers, per 1,000 of each type of vehicle on the road.

General Motors, the manufacturer of the Escalade, released a statement in response to the announcement of the HLDI results, stating that the versions of the Escalade that have been released since the time that the data was collected include several theft-deterrent systems for the vehicles, such as break-in attempt sensors and stronger steering column locks.

The National Insurance Crime Bureau has added, though, that when examining all of the reports of theft that have been made in total, the 1994 Honda Accord was the top make and model on that list.

These Are The 10 Most Stolen Cars I...
➡️ WATCH TOP INSURANCE NEWS STORIES IN: ENGLISH & SPANISH