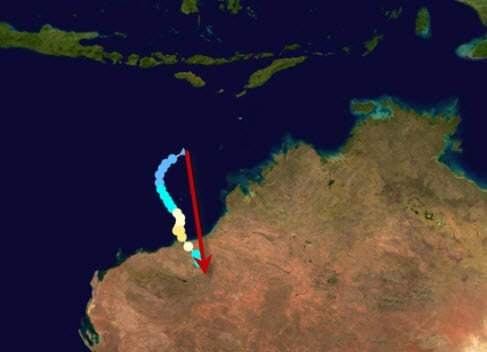 According to catastrophe modeling firm AIR Worldwide, with 1-minute sustained winds of 136 km/h and gusts to 170 km/h, Tropical Cyclone Rusty came ashore as a severe…

tropical cyclone-a category 3 storm by the Australian system of cyclone classification (approximately equivalent to a category 1 storm on the U.S. Saffir-Simpson Scale). Rusty made landfall in Pardoo, which is located approximately 110 kilometers east northeast of Port Hedland. Rusty is weakening as it moves further inland, but still wind gusts of 165 km/h were expected near the center of the storm overnight as well as widespread heavy rainfall overnight and on Thursday. Significant insured losses from this event are not expected, primarily because of the region’s relatively sparse population, stringent building codes, and preparations in advance of the storm.

“Although Rusty did briefly intensify to category 4 storm about 10 hours prior to landfall, it did not maintain that strength,” said Dr. Peter Sousounis, senior principal atmospheric scientist at AIR Worldwide. “Rather, as Rusty approached shore, the eyewall weakened right around landfall. In addition, the trajectory was more southward than southwestward, as was originally forecast. These developments in the evolution of Rusty plus a small radius of maximum winds of 38 km spared Port Hedland from a more destructive situation. Still, there have been reported wind gusts over 100 km/h in Port Hedland along with about 100 mm of rain thus far. While the wind intensity at Port Hedland was not as great as feared, the duration of the winds has been significant, as Port Hedland has received gale force gusts for more than 36 hours-an all-time record.”

Dr. Sousounis continued, “Cities and towns in the path of the storm will experience destructive winds overnight including gusts in excess of 125 km/h. These winds should reach Marble Bar by early Thursday with gale-force winds extending further inland to Nullagine and possibly Newman and Telfer. Widespread flooding, which is exacerbated by Rusty’s massive size and slow movement, is also expected in both the Fortescue and DeGrey catchments in Pilbara coastal streams. Today’s high tide could also bring damaging waves to coastal areas between DeGrey and Wallal. Rusty is expected to weaken below cyclone intensity overnight Thursday.”

According to AIR, most residential and commercial structures in the Port Hedland area should withstand today’s storm with very little damage as these structures performed well during tropical Cyclone George in 2007, when wind gusts reached 200 km/h. Fewer than 2% of buildings sustained damage as a result of George’s force, and most of these buildings proved to have weaknesses due to poor maintenance. Still, Port Hedland has a number of trailer (caravan) parks for visitors and residents, and these structures are particularly vulnerable to damage. Also, if there is damage to residential structures, it will likely be to roofing as residential roofs are typically made of metal and are thus susceptible to wind damage.