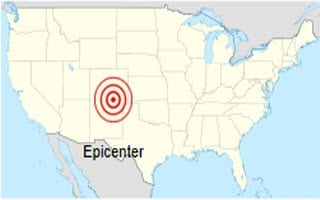 Last week, Colorado was rocked by a magnitude-5.3 earthquake that went largely unnoticed as it was a mere two hours before the now infamous Virginia earthquake. Both events triggered mild panic and dismay due to their rarity. While Virginia and its neighboring states have been rattled by a handful of weak aftershocks, Colorado has been shaken by a total of 13 so far. Insurance companies are taking this opportunity to promote earthquake coverage in the hopes of bolstering the meager number of such policies nationwide.

Colorado’s quake was the largest the state has experienced in over 40 years. It caused modest damage to older buildings and some roadways, but many were shaken by the event, both physically and emotionally. Since the quake, the state has been rocked by numerous aftershocks that have caused additional damage and worn down the nerves of residents. The U.S. Geological Survey notes that these aftershocks will continue to occur for several weeks, but they will diminish in frequency and volume as time goes on.

The majority of homeowners in Colorado do not have earthquake insurance. Few think that such coverage is necessary given the state’s distance from the West Coast and its notoriously violent seismic events. Earthquakes, however, are not as rare in Colorado as many may think. According to the U.S. Geological Survey, the state hosts a multitude of earthquakes each year, with major earthquakes occurring every five to ten years. While the prospect of facing a major earthquake every decade may not be daunting to some, those left to shoulder the financial burden of such events may be reconsidering the value of earthquake insurance.