The injured animal has become the 2019 winner of the insurer’s annual Hambone Award.

Though everybody thinks their own animal stories are weird, Nationwide pet insurance uses its claims and consumer votes to discover whose is the weirdest each year.

As reported last week on Live Insurance News, the Hambone Award at Nationwide pet insurance is awarded to the dog or cat with the strangest claim in the previous 12 months. The award was named after the first year’s winner’s story. That dog ate an entire Thanksgiving ham after having been accidentally trapped inside a refrigerator.

This year, Minnow won the award after having been lost and injured and yet somehow made its way back home again. Minnow was voted as the winner over five potential unusual insurance claims Americans voted on this year.

The Nationwide pet insurance Hambone Award winner wasn’t the only one to be recognized.

Nationwide also gifted $10,000 to the team at the Midway Animal Hospital in Forsyth County. That team was responsible for providing Minnow with the care needed to overcome the injuries the cat sustained. That money will go to providing medical care for other pets in need.

“We are thrilled that those less fortunate in our community will be able to get quality vet care at our vet, Midway Animal Hospital. And Minnow is a happy kitty with her bag full of treats and toys from Nationwide,” said Minnow’s owner, Brannen, as quoted by KIRO7 news.

Minnow had been lost for three weeks. Unexpectedly, she returned home again after all that time, having found her way back. She managed this feat despite the fact that she had lost about one third of her body weight and suffered a broken rib.

Though that, on its own, may be amazing but not too difficult to believe, the story has greater depth. Back in 2016, Brannen and her now late husband visited an animal shelter on a whim. She was drawn to Minnow but didn’t adopt the outdoor brown short-haired tabby. The next day, she changed her mind and visited the shelter again with the intention of adopting the cat, only to discover that Minnow had already been adopted. When she arrived home, she discovered that it was her husband, Graham, who had adopted the cat as a gift for her.

Graham died at the start of 2018 and Brannen and Minnow moved to Atlanta. When Minnow ran away, Brannen was very upset and did everything she could to find the cat. Believing that she would soon need to give up, Brannen spoke to her late husband, talking to him as she drove home from work. She asked for his help to bring Minnow back home to her again.

The following day, Minnow reappeared at the back door while Brannen was taking out the trash. It was 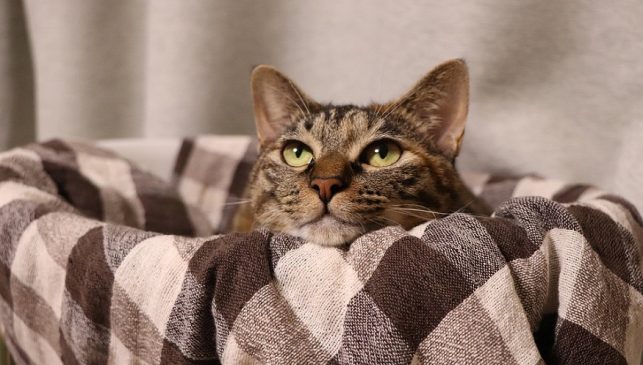 this possible help from beyond that brought this Nationwide pet insurance claim into the finalists for the 2019 Hambone Award.