The insurer is reminding drivers to be mindful of this seasonal increase in driving risks.

As the fall begins, so does the migration season for many kinds of animals, which unfortunately leads to a rise in auto insurance claims in crashes involving animals on the road.

New data by Farmers Insurance showed an increase in 36 percent in claims for those reasons.

Farmers Insurance data showed that there is a rise of about 36 percent in comprehensive auto insurance claims involving crashes with animals on the roads during the fall. This increase continues from September through November, according to the insurer’s data over the last five years.

The insurer’s data also showed that West Virginia experiences the largest number of accidents involving animals during this time of year. That said, the insurer’s data went beyond focusing on the number of claims filed in this category.

Aside from auto insurance claims, the insurer also noted issues that could contribute to higher figures.

Research has shown that when a driver faces an animal on the road, it’s important not to swerve and to focus on maintaining control. According to Farmers Insurance, many drivers aren’t responding in that way. In fact, survey respondents revealed that 66 percent of them though that the best way to minimize damages was to swerve the vehicle.

Instructions in the Fall 2019 Seasonal Smarts Digest encourage motorists to keep a careful eye out for animals on the roadways this fall. Moreover, it can be beneficial to drivers to review both the right moves for them to make if they do face wildlife on the roads, and to review their auto insurance coverage to be sure they know they are covered in the case of a crash.

In the fall, it is particularly helpful to review the details regarding coverage in the event of a collision involving an animal, and the type of damage that may result from that type of crash.

“If you find yourself facing a potential accident with a deer or other animal, do your best to stay the course,” reminded Farmers Insurance head of claims customer experience, Jim Taylor. “It may sound counterintuitive but staying the course may be safer for you and other vehicles on the road than swerving at high speeds in an attempt to avoid the animal.”

Swerving when traveling at a high speed raises the risk of losing control of the vehicle, colliding with 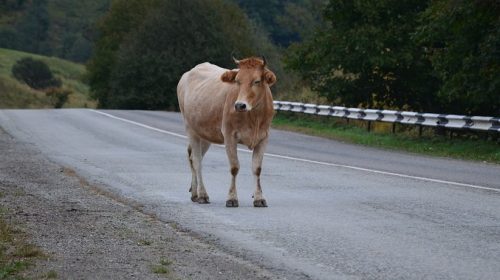 another vehicle, an object, or rolling over. This can increase the cause of an accident and can greatly increase the size of auto insurance claims.