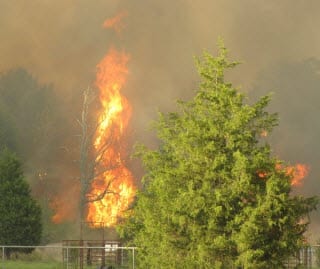 Texas has been battling an outbreak of wildfires since the beginning of September. The fires have wrought carnage throughout the state, burning more than 1 million acres and more than 1,000 homes. The catastrophe has put enormous pressure on the state’s insurers who have been struggling to mitigate the damage caused by the fires. The disaster is so serious that State Farm Insurance has petitioned the Texas Department of Insurance to designate the wildfires as an official catastrophe. The petition was submitted to the Department on September 12, but regulators have only now reached a conclusion regarding the issue.

Officials with the Department of Insurance have denied State Farm’s petition citing information provided by the insurer. If the wildfires had been granted a catastrophe determination, insurers in the state would have been allowed access to resources that would help them cope with the massive amount of claims spawned from the event. Officials assert that such a determination is not yet warranted, despite the massive scale of destruction.

For the time being, all claims resulting from the disaster must be filed within the time allotted as outlined by Texas regulations. Claims that do not meet this deadline will be considered void.

State Farm will continue to pursue the issue on behalf of the policyholders affected by the disaster. Whether the insurer’s efforts will be fruitful is yet to be seen. State Farm is advising those affected by the wildfires to file claims as soon as possible to ensure they do not run afoul of the state deadline.