The politicized meme is spreading like wildfire but contains outdated or outright incorrect information.

A Progressive Insurance meme has gone viral, politicizing the insurer through the use of false and misleading information.

The image makes claims that are inaccurate right down to the naming of the company’s owner.

The viral Progressive Insurance meme makes statements such as that the insurer “is owned by Peter Lewis who donates millions” to left-leaning organizations and to the Democratic Party. That said, Lewis has been dead since 2013. Moreover, though he had once been CEO of the insurance company, he stepped down at the close of 1999, nearly exactly twenty years ago.

The meme goes on to ask “Maybe it’s time to choose a different Insurance Company if you can!” It’s clear the insurer has been specifically politically targeted, but it’s unclear as to who is behind it.

The politicizing Progressive Insurance meme is an example of the ongoing challenges of social media.

Back when Lewis was heading the company, records show he did make millions in donations to certain liberal-leaning causes and organizations such as MoveOn.org and the American Civil Liberties Union. The Federal Election Commission donated thousands of dollars to Democrats over the years.

On January 1, 2000, he was succeeded as CEO by Glen Renwick. FEC records show that before becoming CEO, Renwick donated $500 to Senator Bill Bradley’s (NJ-D) bid for Democratic presidential nomination. While CEO in 2003, he donated $600 to the Property Casualty Insurers Association of America Political Action Committee. He retired in 2013.

Tricia Griffith succeeded Renwick as Progressive Insurance CEO and has no FEC record of making any political contributions.

The popular Progressive Insurance meme underscores the importance of individual user fact checking as social media has yet to come close to controlling the transfer of misinformation. The insurer has a very specific policy with regards to charitable and political spending, which it published in its most recent 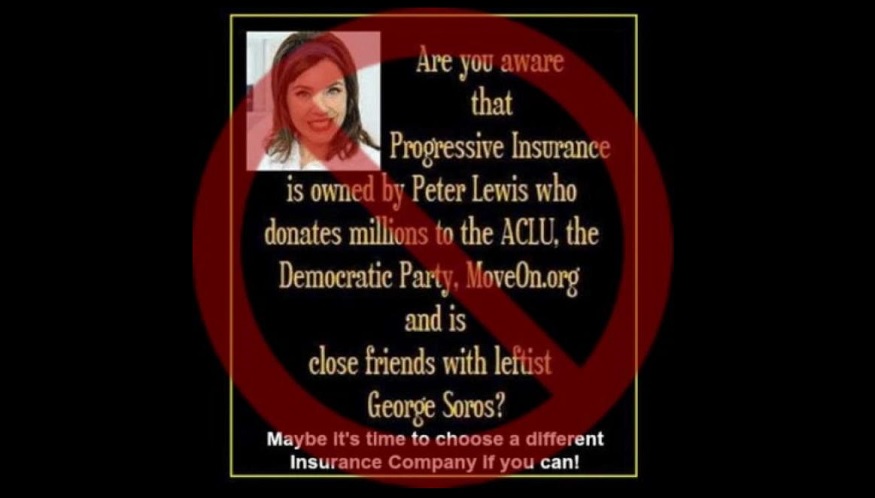 Report on Involvement in Public Policy. As of the writing of this article, the insurer had yet to release a statement or response to the viral meme or the claims it made.