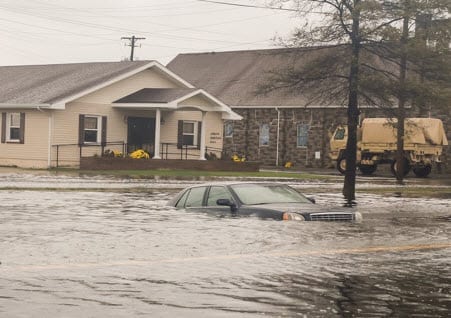 BOSTON, Nov. 26, 2012 – Since Sandy made landfall as a post-tropical cyclone on October 29, 2012, in southern New Jersey, catastrophe modeling firm AIR Worldwide has been analyzing the storm’s characteristics and impacts. Informed by the latest available information on surge height and extent from the USGS, surface wind speed observation data, and findings from AIR’s post-disaster survey teams, AIR now estimates that insured losses from Sandy will be between USD 16 and USD 22 billion.

“The significant increase in estimated losses from AIR’s estimate issued on October 30, the day after Sandy’s landfall, is driven primarily by an increase in estimated losses from storm surge damage,” said Dr. Tim Doggett, principal scientist at AIR Worldwide. “This, in turn, is driven by a reassessment of the percentage of flood losses that will actually be paid, as well as an improved storm surge footprint run against high-resolution industry exposure information.”

* Commercial Flood Insurance Penetration: AIR’s default assumption-and the one used to generate insured loss estimates hours after Sandy’s landfall-is that 10% of commercial structures carry flood insurance. Based on further investigation into how storm surge losses will be covered under Sandy, AIR now believes that a revised assumption of 20% is more applicable for this particular storm and region. Therefore, the above range of losses reflects the assumption that 20% of the damage from Sandy’s storm surge to commercial and industrial properties will be covered.

* Homeowners Deductibles: One hour before Sandy made landfall, the National Hurricane Center (NHC) issued a public advisory, which, in addition to updating the meteorological information and position of Sandy, stated that the storm had transitioned from a hurricane to a post-tropical cyclone. In the days following landfall, officials in New York, New Jersey, Connecticut, Delaware, Maryland, New York, Pennsylvania, Rhode Island and Washington, DC all ruled that insurers may not impose hurricane deductibles on homeowners policies in their jurisdictions. (In AIR’s initial loss estimates for Sandy posted on October 30, hurricane deductibles were applied.)