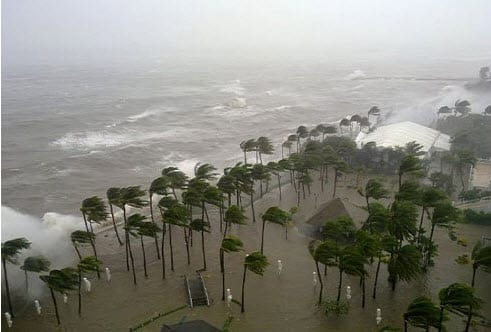 According to catastrophe modeling firm AIR Worldwide, Typhoon Nesat made landfall as a moderate Category 1 storm on the northeastern corner of the island of Hainan at 2:30 pm local time (6:30 UTC) Thursday, near the city of Wenchang in Wengtian Township. Its maximum sustained wind speeds at the time were 135 km/h. After crossing the northeastern tip of the island and moving along Hainan’s northern coast, Nesat turned sharply north, crossed the narrow (25 km) Qiongshou Strait, and made a second China landfall on the western coast of the Leizhou Peninsula in Guangdong province.

Nesat is the 17th typhoon of the 2011 season, and the strongest to strike China this year.

As of the Japan Meteorological Agency’s (JMA) 15:00 UTC analysis (11:00 pm local time in China), Typhoon Nesat had maximum sustained winds of about 135 km/h with gusts up to 200 km/h, and was located on the western coast of the Leizhou Peninsula in Xuwen County, about 80 kilometers northwest of Hainan’s capital, Haikou. Nesat’s tropical storm-force winds stretch across roughly 110 kilometers as the storm moves at about 10 km/h to the northwest and, according to the JMA’s current projected track, toward yet another landfall, this time near the border with Vietnam, about 700 km away.

“Once Typhoon Nesat reentered the South China Sea after a landfall in the Philippines two days ago, it maintained a nearly steady intensity,” said Dr. Peter Sousounis, principal scientist at AIR Worldwide. “On Hainan, the capital city of Haikou experienced wind gusts of 126 km/h and has received 82 mm of rain thus far, with additional significant rainfall accumulations expected.”

Typhoon Nesat has moved across the northeastern most tip of Hainan, passing through or very close to Haikou. It then traveled along the northern coast of the island until it turned sharply north and crossed the Qiongshou Strait. This is an area-Hainan island and southern Guangdong-that has developed rapidly in recent years. It thus includes both urban and rural areas, and many light-industry facilities.

According to AIR, the predominant exposures in the region are commercial and industrial buildings, with residential exposures being much fewer. A significant portion of the residential exposure, however, is apartment buildings. At Nesat’s wind speeds, there may be some isolated instances of minor non-structural damage to well-constructed engineered commercial and apartment buildings. Insurance penetration for typhoons is quite low in China, particularly for residential risks, and insurance penetration varies by province, Hainan having one of the lowest rates in China. (However, when there is coverage, wind and flood generally are covered together in the same policy.)

According to AIR, single-family homes in the region where Nesat made landfall and on the Leizhou Peninsula in Guangdong are primarily of masonry construction. Apartment buildings are 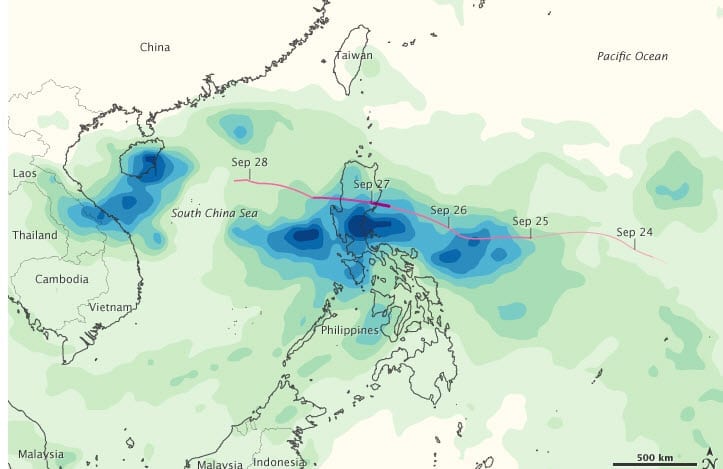 “Typhoon Nesat’s general movement to the northwest is forecast to continue, eventually into the Gulf of Tonkin,” said Dr. Sousounis. “At present, Nesat remains a consolidated system with a well-defined, low-level circulation center, but it is expected to weaken slowly as it approaches the Vietnam border area. It is tracking west under the steering influence of a subtropical ridge (air mass) that is currently over southeast China.”

“Nesat’s landfall north of the Red River Delta region is expected in the next 24 hours, probably sometime in the early evening, Friday. Thereafter, Nesat is forecast to slowly weaken and then dissipate. Heavy rain is the primary concern from Nesat, since the region-Hainan and southern Guangdong as well as northern Vietnam-has experienced significant rainfall during the past several weeks, and satellite estimates indicate that in its wake, Nesat is producing rainfall totals of more than 300 mm.”

AIR is continuing to monitor all developments in the Northwest Pacific and will provide updates if warranted. However, given Nesat’s current and expected wind speeds and the generally low insurance penetration throughout the region, AIR does not expect significant insured losses from Nesat at this time.