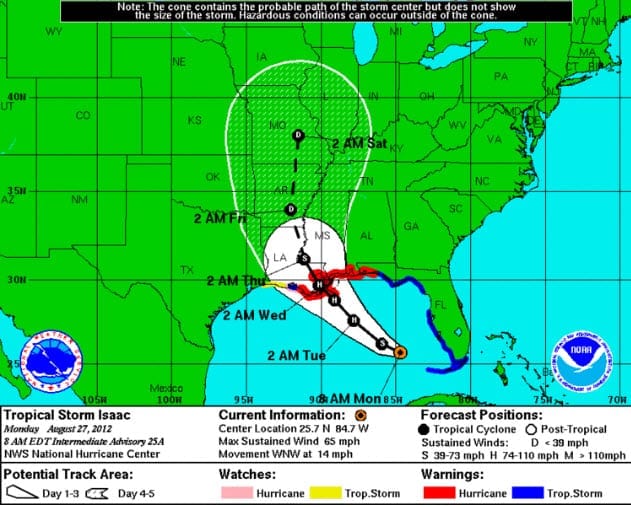 BOSTON, August 27, 2012 – According to catastrophe modeling firm AIR Worldwide, Tropical Storm Isaac has passed through the Florida Keys-where it delivered wind and rain yesterday, but caused little damage-and moved into the Gulf of Mexico; the storm is currently about 360 miles southeast of the mouth of the Mississippi River, moving west-northwest at 14 mph. Isaac’s forward speed has decreased since yesterday, while its maximum sustained winds-at 65 mph-have remained constant.

“Data from Hurricane Hunter aircraft indicate that Isaac has not strengthened since yesterday, possibly because the storm is battling with low- to mid-level dry air that is limiting thunderstorm activity around the core of the system,” said Dr. Tim Doggett, principal scientist at AIR Worldwide. “Conditions should be favorable for intensification today, however, and Isaac is now expected to achieve hurricane intensity in the next 24 hours. The landfall target now seems to be settling around the north central Gulf, near New Orleans. Landfall is forecast for Wednesday morning, August 28, the same day that Hurricane Katrina arrived on the Louisiana coast in 2005. Isaac will likely be a Category 2 hurricane at the time of landfall; Katrina was a strong Category 3 hurricane.”

“With respect to Isaac’s potential track and landfall location, the dynamical forecast models are now in greater agreement than they had been prior to and over the weekend,” continued Dr. Doggett. “Over the past 24 hours the numerical model guidance has converged a little more tightly around the New Orleans/Mississippi delta area-about 100 miles farther west than was expected on Friday. This shift-which had been difficult to anticipate due to a weakly established steering current in the Gulf-makes a substantial difference to the coastal populations who are now on high alert. ”

The track is not the only fluctuating element of the forecast. The intensity forecast has also been hard to establish. Dr. Doggett commented, “Despite the lack of significant limiting environmental factors such as wind shear or cooler sea surface temperatures,  dry air and interaction with land masses have limited Isaac from developing much in the way of a well-defined structure at any point in its lifetime to date. The current forecast-which has Isaac finally reaching hurricane status tonight-delays that development yet again. Even so, Isaac reaching hurricane status tonight leaves 24 hours of time for additional development prior to landfall; within that window, Isaac could reach Category 2 intensity. How much stronger Isaac will become will depend in part on the storm’s track-that is, how much time it will spend over the warm waters of the Gulf of Mexico.”

“Further adding to the uncertainty around Isaac’s forecast intensity is the fact that the storm will be moving over some of the warmest waters it has encountered to date, so a period of rapid intensification that leads to even stronger winds cannot be ruled out. Though the expected track has the storm dissipating quickly once ashore, a small set of the dynamical forecast models, which show Isaac tracking along the western edge of the cone, bring strong winds well inland. These scenarios-which put inland exposure at risk-take the storm over a locally warm region of the Gulf for a longer period of time.”

Dr. Doggett continued, “Yesterday, Isaac moved past the Florida Keys, causing little harm. Even though the storm moved well west of Tampa, tropical storm-force winds and heavy rains impacted the area because of Isaac’s large size. Today, as the remnants of Isaac move across South Florida, much of it remains under a tornado watch.”

According to AIR, in the Gulf of Mexico, oil companies began shutting down offshore oil and gas rigs this weekend.