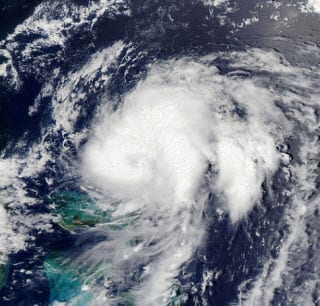 BOSTON, Aug. 15, 2011 — According to catastrophe modeling firm AIR Worldwide, the seventh named storm of the Atlantic hurricane season, Tropical Storm Gert, is approaching Bermuda and is expected to skirt the island before turning back out to sea, away from the U.S. east coast.

The tropical depression that is now Gert formed in the Atlantic late Saturday night, and was upgraded to tropical storm status by Sunday afternoon. As of today’s 11:00 AM EDT advisory from the National Hurricane Center (NHC), Gert was located about 95 miles southeast of Bermuda. With maximum sustained wind speeds of 60 mph, the storm is moving north at 12 mph and is expected to speed up over the next day.

“Although the storm is in an area of low vertical wind shear, which is favorable for storm development, it will enter an area with colder sea surface temperatures tomorrow,” said Scott Stransky, scientist at AIR Worldwide. “However, forecasters at the NHC do not anticipate Tropical Storm Gert has enough time to develop into a hurricane. Still, some strengthening is possible in the next 24 hours while it is
over warmer water. The NHC has given Gert a 33% chance of becoming this season’s first Atlantic hurricane.”

Stransky continued, “The most likely forecast track takes Gert just east of Bermuda later today, bringing one to three inches of rainfall to the island. Given that the radius of tropical storm force winds is about 70 miles (mainly to the north and east of the system), Bermuda will be right on the borderline of tropical storm-force winds, but will escape Gert’s strongest winds. Wind damage is expected to be minimal. A tropical storm warning was recently discontinued in Bermuda.”

According to AIR, Bermuda’s building code is extremely strict; homes, which are typically built of limestone or concrete blocks, and commercial buildings, which are typically reinforced concrete, are required to be built to withstand sustained winds of 110 mph and gusts of up to 150 mph. Gert’s tropical storm force winds are not expected to cause structural damage.

AIR continues to monitor the situation and will make additional information available as warranted by events.