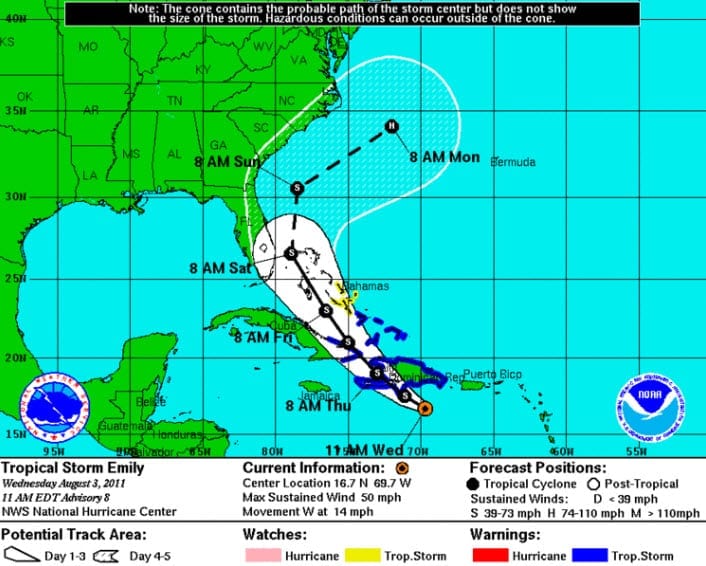 BOSTON, Aug. 3, 2011- According to catastrophe modeling firm AIR Worldwide, Tropical Storm Emily is expected to hit the island of Hispaniola-shared by Haiti and the Dominican Republic-with heavy rain and 50-mph winds this afternoon. The rainfall should worsen in the course of the day as the storm passes over the island. Current projections show the center of the storm passing close to Port-au-Prince, Haiti’s devastated capital, where 630,000 people remain without shelter after last year’s January earthquake. A tropical storm warning is in effect for both countries, for the Southeast Bahamas and the Turks and Caicos islands, and for the eastern Cuban provinces of Guantanamo and Holguin. The government of the Bahamas has issued a tropical storm watch for the Central Bahamas.

According to AIR, while Port-au-Prince remains largely in disrepair, buildings outside the larger cities of both counties are of poor construction and subject to damage by heavy rains, flooding, and mudslides. Santo Domingo, the Dominican Republic’s capital, is a mix of modern buildings and older colonial-style buildings. Residential structures most commonly are made of reinforced masonry and unreinforced masonry, both of which can sustain damage at high flood levels. Commercial structures are predominantly reinforced masonry and reinforced concrete, which typically withstand flood damage well.

“The mountains on Hispaniola rise as high as 10,000 feet and are expected to weaken Emily as the storm interacts with the high terrain,” said Scott Stransky, scientist at AIR Worldwide. “Emily’s fate after its passage over the island, however, is very uncertain. The NHC’s 11:00 AM Discussion raised the possibility that Emily might not survive the passage-but that, ‘if the cyclone survives the next day or two,’ upper level winds are expected to be a little more favorable for some strengthening as the storm moves northwestward across the Bahamas. After that, the various models the NHC monitors diverge, and Emily could undergo some re-strengthening depending on just which direction its track takes it. Emily’s ‘cone of uncertainty’ at the present time, includes, at its westernmost extremity, the possibility of a brush with southern Florida’s east coast.”

According to the 11:00 am (EDT) National Hurricane Center (NHC) Public Advisory, Tropical Storm Emily is about 125 miles south of Santo Domingo in the Dominican Republic and continues to become more disorganized while still moving at near 14 mph to the west. A turn to the northwest with little change in forward speed is expected later today. Emily’s tropical storm force winds extend outward up to 115 miles, with a greater reach to the north and east of the center.

Yesterday, August 2nd, Tropical Storm Emily brought heavy downpours and strong winds to Martinique, causing severe flooding and landslides in parts of Fort-de-France, the capital city. As of Wednesday morning, some 5,000 houses remained affected by power outages, and several roads are still cut off. In Puerto Rico, where rain fell hardest in the west (largely sparing San Juan, the capital), there have not been reports of major damage. However, several roads have been closed by flooding and downed trees, and tens of thousands of people are without power. Emily had been expected to bring up to six inches of rain to the island.

Emily is expected to leave total rain accumulations of six to twelve inches in the both countries, Haiti and the Dominican Republic, with isolated areas possibly receiving as much as 20 inches. Easternmost Cuba is also expected to receive heavy rain. These rains could cause life-threatening flash floods and mud slides.

AIR is continuing to monitor Tropical Storm Emily and will provide additional information as events warrant.