The electric vehicle has become the first from the company to receive this I.I.H.S. rating.

The I.I.H.S. granted its top safety pick+ designation to the electric vehicle.

The Tesla Model 3 received the top safety pick+ designation from the I.I.H.S. after the vehicle performed exceptionally well. The institute said that the Model 3 earned this top safety label after it managed to achieve good ratings in all categories for the crashworthiness testing.

The vehicle’s structure was able to hold up solidly during the driver-side small overlap front test, said the I.I.H.S., said a recent Reuters report. The vehicle was also able to perform well in a headlight test. Many models of vehicle have struggled to perform well in that particular test.

This Tesla Model 3 achievement represents a notable endorsement for the vehicle’s safety systems.

CEO Elon Musk has regularly touted the automaker’s safety systems. This achievement has added some clout to Musk’s claims. A blog post from the automaker pointed out that the vehicle’s low center of gravity decreases the risk of a rollover. Moreover, since it does not contain an engine, it has more space for a crumple zone that it more effectively absorbs energy than a traditional gas-powered car. Though the carmaker’s Model S sedan has also previously been tested, and while it did do well, it wasn’t quite able to make it into that top category.

Until this latest designation, the only purely battery-powered electric vehicle to have achieved the Top Safety Pick+ award was the Audi e-tron, one of Tesla’s top rivals. Although the Chevrolet Bolt did perform well for the crash tests, it wasn’t quite able to make it to top I.I.H.S. safety ratings because it scored a “poor” rating on its headlights test.

Still, the performance of all the main competitors, not just the Audi e-tron and Tesla Model 3, have shown through the I.I.H.S safety testing that they are quite safe to drive.

“You don’t need to trade away safety if you want to choose an electric vehicle,” said I.I.H.S. chief 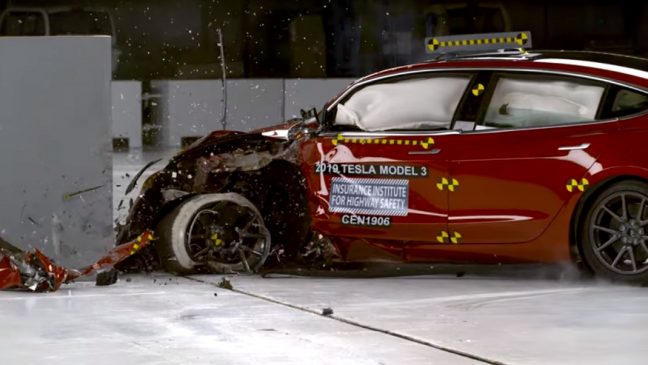