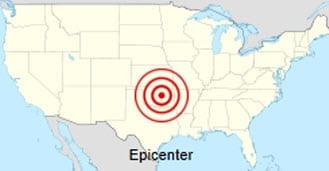 Residents of Oklahoma were surprised Saturday when the state was rocked by a 5.6-magnitude earthquake. The quake caused a significant amount of damage in the state, which is still recovering from a spat of devastating tornados that tore through Oklahoma in August. State insurers have yet to release estimates regarding the cost of damages, but it is clear that the quake caused some damage to homes and businesses in Northern Oklahoma.

The quake has been called a once-in-a-century event, though another 5.8 quake struck the state in August of this year. Earthquakes are not excessively rare in the state, but few residents have appropriate insurance coverage for such an event. Those without insurance will have to rely on government aid. Some residents may have to wait several weeks before they can purchase new policies from insurers.

Due to the number of aftershocks that usually follow earthquakes, insurers are unable to provide coverage for events they know will happen. This means that properties within 500 miles of the quake’s epicenter will not be able to be covered by earthquake insurance until insurers are positive that the aftershocks have come to an end. This is bad news for some homeowners whose properties may be damaged by the imminent aftershocks, but insurers are expected to continue writing policies by the end of next week.

No casualties have been reported as a result of the quake thus far.

For more information or rates on Oklahoma homeowners insurance.