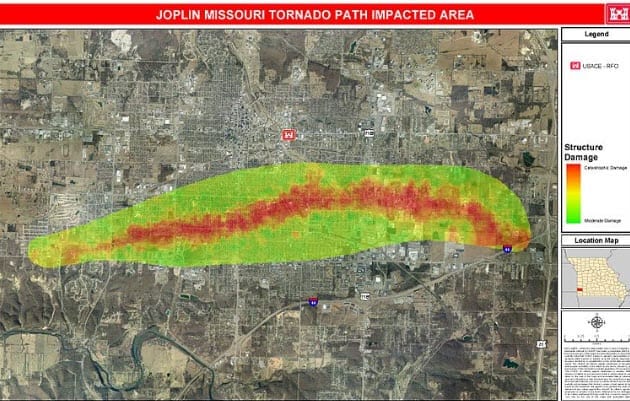 The twister had the highest costs of any that have occurred since 1950.

The tornado that ripped through Joplin in 2011 has now been found to be the most costly that has occurred since 1950, and among the top natural disasters in United States history.

Additional costs just keep being added to the final total, with a shelter for the care of over 1,300 pets priced at $372,000, a new concession stand that had been taken on at the ruined high school at $228,600, and even 30 new manhole covers to replace those that were torn away at $5,800.

Beyond financial cost, it was also the deadliest one that has occurred in that same timeframe.

It is estimated that insurance policies will cover the majority of the damage, which is currently totaled at $2.8 billion. However, according to state, federal, and local officials, taxpayers may be footing the bill for around $500 for other costs, associated with low-interest loans, local bonds, and state and federal disaster aid, which could increase taxes.

Almost one fifth of the latter amount was used to pay contractors who were hired to take the debris out of the town. Another millions upon millions were spent on providing those who were suddenly homeless with temporary housing and covering other vital living expenses immediately following this most horrifying of natural disasters. Other funds are assisting in subsidizing the a new hospital to be built to replace the one that the storm left damaged beyond repair.

When compared to some other major natural disasters in the country, such as 2005’s Hurricane Katrina, which flooded New Orleans and other nearby towns and cities on the Gulf Coast, this one was significantly lower, simply because it struck a much more localized space in a smaller population. However, this catastrophe has brought the spotlight back onto the government’s role in assisting before, during, and after this type of emergency and has repeated a number of questions that hadn’t been asked in a while.