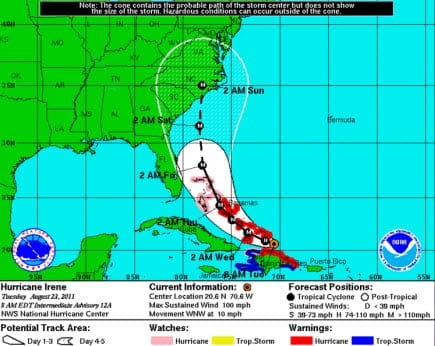 According to catastrophe modeling firm AIR Worldwide, Irene became the Atlantic basin’s first hurricane of the 2011 season when its winds strengthened to 75 miles per hour at about 5:00 AM Monday morning as it was exiting Puerto Rico’s northern coast. Currently a Category 1 hurricane on the Saffir-Simpson Hurricane Wind Scale with sustained winds of 80 mph, Irene is expected to strengthen further over the next few days, potentially reaching Category 3 status by Saturday, depending on how long it remains over the ocean.

“Hurricane Irene is the ninth named storm of the 2011 Atlantic hurricane season and the first hurricane,” said Scott Stransky, scientist at AIR Worldwide. “This is the first hurricane season since record-keeping began in 1851 that so many consecutive tropical storms formed without one of them having become a hurricane. So far this year the tropical Atlantic has been characterized by both a lack of vertical instability and an abundance of dry, sinking air, conditions that tend to keep the atmosphere stable, thereby inhibiting storms from intensifying into hurricanes.”

Irene made landfall along the east coast of Puerto Rico near Punta Santiago at about 1:25 AM EDT Monday morning as a tropical storm with maximum sustained winds of 70 miles per hour, just below hurricane strength. The storm passed about ten miles southwest of San Juan, Puerto Rico’s capital, at tropical storm strength and continued its west-northwest movement across the island toward the Dominican Republic and Haiti.

The National Hurricane Center (NHC), in its 11:00 AM EDT Advisory, placed Irene 150 miles west northwest of San Juan, Puerto Rico, and about 50 miles east northeast of Punta Cana, Dominican Republic. With maximum sustained winds of 80 mph and west-northwest motion at about 12 mph, Irene is expected to track along the Dominican Republic’s northern coast today. “Current forecasts place Irene on a path that could take it to the east coast of Florida by Friday, though there is considerable uncertainty in its forecast path,” said Stransky. “A slight shift in the forecast path towards to the east, as some computer models are currently suggesting, will allow the storm to undergo more significant intensification and make landfall as far north as North Carolina.”

Irene’s hurricane-force winds currently extend outward only about 15 miles, but its tropical storm-force winds extend up to 150 miles, mainly to the northwest and northeast of the storm center. “Given its forecast track to the north of Hispaniola, most of the damaging winds should stay over the ocean,” added Stransky.

Strong winds continue to affect Puerto Rico, and heavy rain is falling as island officials are trying to assess the impact of Irene’s passage. The island’s Electric Power Authority reports that about half of its customers, 800,000 subscribers, most in the northeast, are without electricity. Altogether, Irene has cut power to more than a million people

Hurricane Irene is expected to produce total rainfall accumulations of five to ten inches across Puerto Rico and the Dominican Republic, with isolated maximum amounts of up to 20 inches. Tropical storm conditions-from the outer reaches of Irene’s winds-are expected to begin to impact the Dominican Republic sometime Monday afternoon. The highest winds are likely to occur over more mountainous or higher-elevated areas. These conditions-with rainfall accumulations comparable to that expected in Puerto Rico-are projected to reach the southeastern Bahamas and the Turks and Caicos Islands Tuesday, and the central Bahamas by late Tuesday.

According to AIR, the majority of new residential buildings in Puerto Rico are made of masonry, reinforced concrete, or both. In older urban buildings there is a greater variety of construction material used. A majority of commercial structures are low to mid-rise buildings, usually of one to six stories. Small apartments, hotels, offices and other low-rise commercial properties are usually masonry or
reinforced or block concrete. A concrete building type unique to Puerto Rico, the “bunker” style, is used for both residential and non-residential structures across the island. Bunker buildings have walls made of reinforced concrete, often reinforced with steel, combined with reinforced masonry.

Building code enforcement in Puerto Rico is relatively high. Thus given the latest reports of Hurricane Irene’s wind speeds in Puerto Rico and these construction types, AIR does not expect insured losses to be significant.

Hurricane Irene was still a tropical wave less than two days ago, when it made a transition to a tropical storm with 50 mph winds in just a few hours. On Sunday, it passed through the Leeward Islands to the east of Puerto Rico, bringing heavy rains and winds that closed airports and flooded low-lying areas. Early Sunday Irene churned up rough surf, caused scattered power outages, and dropped as much as seven inches of rain on parts of the islands of Antigua and Barbuda, St. Kitts and Nevis, Guadeloupe, and St. Maarten.

AIR continues to monitor Hurricane Irene closely. Additional information will be made available after the storm has exited Hispaniola, as it makes its way towards the Bahamas.