Insurance news – Can industry and consumers find a common ground 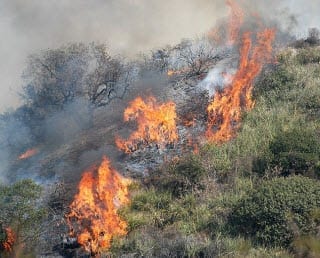 Insurance companies have announced their hopes to “share the risk” of wildfires with the communities and homeowners located within wild land-urban interface areas.

A Rocky Mountain Insurance Information Association presentation outlined the details of the fact that insurance companies are not as willing to provide or renew insurance to customers who are at a high risk of wildfires.

As stated by a New Mexico-based State Farm Fire and Casualty Insurance Company official, Matt Brenner, “Why should homeowners be interested in protecting their property when it comes to wildfires?” He went on to say that “The bottom line is giving the availability and affordability of insurance to people who want to live in those areas.”

Brenner also explained that insurance is a concept that is centered around risk, and insurers are not as willing to provide coverage to individuals whose risks are too unfavorable. He was one of two speakers who addressed insurance and wildfire in Ruidoso, at the New Mexico Wildland-Urban Interface Summit. He was filling in for Rocky Mountain Insurance Information Association executive director, Carol Walker.

Walker was unable to attend and give the association’s presentation because she was helping homeowners who had been affected by the Lower North Fork Fire that impacted 4,140 acres of land to the southwest of Denver last week. Brenner explained that State Farm and the association were hoping to provide homeowners with increased knowledge so that they could better prevent the loss of their property.

He said that even if all of the proper efforts have been carefully taken to stop a home from being burned in a wildfire, it is still impossible to completely eliminate the risk that it could occur. However, he also added that if homeowners wait until there is already a fire before they take action, then they have waited too long.

Firewise Communities/USA program regional advisor, Keith Worley, stated that insurers are beginning to withdraw coverage quite rapidly from homeowners who live in wildland-urban interfaces. He added that they aren’t paying attention to ISO ratings, or how many fire stations are nearby, nor how many trucks are at a certain fire department’s disposal. Instead, what they are seeking, is the participation of the homeowners.