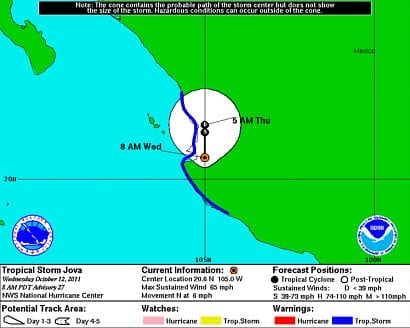 BOSTON, Oct. 12, 2011 – According to catastrophe modeling firm AIR Worldwide, Hurricane Jova made landfall as a Category 2 storm in a sparsely populated stretch of the Mexican state of Jalisco, near the town of Chamela at 23:00 local time yesterday (6:00 UTC today). Maximum sustained winds at landfall were nearly 100 mph, as originally forecast. High waves and heavy rain were also reported.

“Today, Jova’s most significant threat is that from precipitation; even prior to making landfall, Jova’s outer rain bands brought heavy rainfall to Mexico’s southwest coast,” said Dr. Tim Doggett, principal scientist at AIR Worldwide. “At this time, Jova’s tropical-storm force winds extend outward for 105 miles. Given the storm’s decreased strength, the extent of wind damage will likely be mitigated. Puerto Vallarta is likely to be the most affected area from a wind perspective; it may experience tropical storm-force winds later today.”

As of the National Hurricane Center’s (NHC) 11:00 AM EST advisory today, Jova is 15 miles east of the popular tourist resort of Puerto Vallarta. The storm has weakened significantly, to tropical storm strength; maximum sustained winds are now 65 miles per hour. Jova is moving slowly north, at 6 mph. The storm is forecast to continue to weaken, dissipating sometime in the next 24 hours.

Dr. Doggett continued, “Jova’s slow speed raises the potential for heavy rainfall accumulations-especially in the higher terrain to the right side of the storm track, including in Guadalajara, Mexico’s second most populous city and the capital of Jalisco. Indeed, given the high exposure concentration in Guadalajara, there is risk of notable flood loss from this event. Rainfall accumulations of 6-12 inches could be seen in the state of Jalisco, as well as in the states of Michoacán, Colima, and Nayarit. Isolated locations could experience accumulations as high as 20 inches.”

Jova made landfall between Manzanillo and Puerto Vallarta; the coastline in this region is dotted with popular beach resorts, though it also includes vast areas that are sparsely populated. Thus, the exposure value in this region is relatively low.

According to AIR, Jova’s Category 2 winds at landfall could have caused considerable damage had they impacted a more densely populated location. Indeed, structural damage to non-engineered buildings may occur from Category 2 winds, particularly to roofs-while windows and the cladding on engineered structures could be damaged by impact from debris. Most insured residential structures on Mexico’s west coast-including those in Manzanillo and Puerto Vallarta-are made of confined masonry, which performs better than plain masonry under lateral wind loads because of its use of bond beams and columns. However, a large percentage of houses built every year in Mexico are constructed without a building permit, perhaps as large as 50%; these buildings are more prone to damage from wind. Commercial properties in this region, meanwhile, tend to be constructed of confined masonry or reinforced concrete.

Although limited wind damage is expected to well-built structures at Jova’s observed wind speeds, the storm is expected to bring torrential rainfall; heavy rains are expected to persist well inland along the track and flooding and mudslides are a major concern.

The damage picture from Jova is still emerging at this time, but the states of Jalisco, Colima and Nayarit are expected to be hit hardest. In the major port of Manzanillo, there have been reports of toppled trees, disrupted power lines and flooded streets. North of Manzanillo, flooding from storm surge remains possible along a 210-mile stretch of Mexico’s coast.

Dr. Doggett commented, “Hurricane Jova’s general movement to the north is forecast to continue as it moves inland today-on a track that will take the storm over western Mexico today and tonight. It is expected to weaken and ultimately dissipate within 24 hours. At present, Jova remains a consolidated system with a well-defined and tight center. Heavy rain is the primary concern.”

AIR is gathering the available meteorological information on this event and once the storm has run its course, AIR will determine if a loss estimate is warranted.