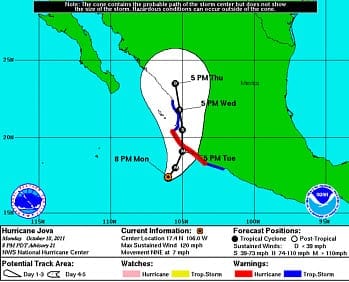 According to catastrophe modeling firm AIR Worldwide, Jova, the ninth hurricane of the eastern Pacific season and the tenth named storm is 250 miles southwest of the port city of Manzanillo (population 100,000) in the state of Colima, Mexico. As of the National Hurricane Center’s 8:00 a.m. PDT advisory today, the storm is tracking east at 5 mph. Having undergone significant intensification overnight, maximum sustained winds are now 125 mph with higher gusts.

“The storm is a significant threat because it is slow-moving, and the potential exists for major flooding in Manzanillo and other locations along the coast,” explained Dr. Tim Doggett, principal scientist at AIR Worldwide. “The storm could bring 5 to 10 inches of rain over the states of Michoacan, Colima, and Jalisco with up to 15 inches possible in some locations in mountainous terrain. In addition, a slow-moving storm will also exacerbate wind damage as structures are exposed to battering winds over a prolonged period.”

Most of the forecast models have Jova taking a turn towards the north-northeast east on Tuesday, eventually turning northward after interacting with two upper level disturbances. “Presently, Jova-a small storm, with hurricane-force winds extending outward just 15 miles- is experiencing low-to-moderate wind shear conditions,” said Dr. Doggett. “Ocean temperatures are warm, 28 – 29°C, but the warm waters do not extend to great depth, limiting Jova’s potential for further rapid intensification. While in this favorable environment, the storm should continue to slowly strengthen, possibly nearing Category 4 strength by tomorrow.”

As the storm approaches landfall, the forward speed should increase slightly. The current forecast has the storm weakening slightly just before landfall and coming ashore as a strong Category 3 storm, with maximum winds of 125 mph.

At Category 3 wind speeds, damage is expected to be significant. Structural damage to houses and buildings may occur, particularly to rooftops, while windows and cladding on engineered structures could be damaged by impact from debris. Many trees will likely be uprooted and snapped, blocking roadways or damaging homes and automobiles. According to AIR, most insured residential structures on Mexico’s west coast are made of confined masonry, which performs better than plain masonry under lateral wind loads because of its use of bond beams and columns. However, a large percentage of houses built every year in Mexico are constructed without a building permit, perhaps as high as 50%. Commercial properties tend to be constructed of confined masonry or reinforced concrete.

Currently, a single national building code for structural design does not exist in Mexico. The enactment and adoption of building codes are subjected to the government department in each of the more than 2,400 municipalities.

AIR is continuing to monitor Jova and will provide additional information as events warrant.