Hurricane season is nearly here, and that could mean trouble for the U.S. east coast. The National Oceanic and Atmospheric Administration (NOAA) has issued a new report concerning the arrival of hurricane season and what that could mean for states along the Atlantic Ocean. Hurricanes have proven to be a major concern for the U.S. over the past few years, especially when it comes to homeowners insurance and flood coverage. Hurricane Sandy is the most recent example of the damage that these natural disasters can cause and NOAA is predicting that powerful storms like Sandy could be common in the future.

NOAA forecasts as many as 6 major hurricanes this year

According to NOAA, there is a 70% likelihood that as many as 20 named storms could form in the Atlantic Ocean and reach the U.S. this year. As many as 11 of these storms could become modest hurricanes, with another 6 that could develop into major hurricanes that could be considered powerful natural disasters. NOAA’s forecast does not predict whether or not these storms will actually make landfall, but does suggest that this could be a possibility. 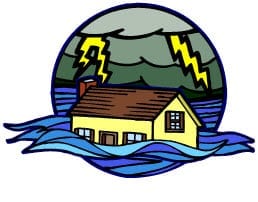 The U.S. homeowners insurance sector is still reeling from the impact of Hurricane Sandy, which caused significant damage in the Northeastern states of New York and New Jersey. Florida, which is somewhat infamous as a target for hurricanes, has managed to avoid a direct hit from one of these natural disasters in recent years. This has been a boon for the homeowners insurance sector in the state, which is currently embroiled in its own financial troubles associated with a state-run insurance program. While homeowners insurance is in a precarious position along the east coast, the most problematic issues exist with the National Flood Insurance Program.

Hurricanes may cause more problems for federal flood insurance program

Hurricanes do not simply cause damage with their strong winds. These storms also produce widespread flooding, which is not something that is typically covered in conventional home insurance

policies. This coverage is almost exclusively handled by the federal government through the National Flood Insurance Program. The federal program has, for the past several years, been faced with troubling financial problems that have been made worse by the impact of Hurricane Sandy. If this year’s hurricane season does prove active, the flood insurance program may be in for more trouble in the future.