According to catastrophe modeling firm AIR Worldwide, Central  Europe has been inundated during the past several weeks with heavy and relentless rain, which has resulted in some of the worst floods seen in the area in more than  70 years. The floods have reached record levels, particularly in Germany, Austria, and the Czech Republic. Switzerland, Hungary, Slovakia, and Poland are also  affected. The heavy rains are resulting in landslides in many mountainous areas, while in the floodplains, which were already saturated due to rains in previous weeks, river levels rose to record heights.

According to AIR, Germany is the hardest hit country, with some flood levels reaching the highest in recorded history. Water levels in Passau, which is located at the intersection of the Danube, Inn, and Ilz rivers, are at the highest on record since 1501. Electricity has been shut off and rescuers are using boats to evacuate residents. The river gauges along the Danube have been knocked out. Other cities in south and southeastern Germany are preparing for the worst as the Danube and Inn rivers continue to rise. Dangerous flood levels in Germany have also affected Saxony, Thuringia, and Baden-Württemberg. Severe water levels are reported in the cities of Rosenheim, Dresden, Zwickau, and other areas.

In Austria, rising waters in the Danube are threating the cities of Linz and Melk and floods have already reached some historic city centers. Flood alerts are in effect in the western provinces of Vorarlberg, Tyrol and Salzburg, as well as northern parts of Upper Austria. Flooding in Tyrol and Styria is considered the
worst in the area since 2002.

Flood warnings in the Czech Republic are in effect for 40 cities, including Prague where the Vltava River 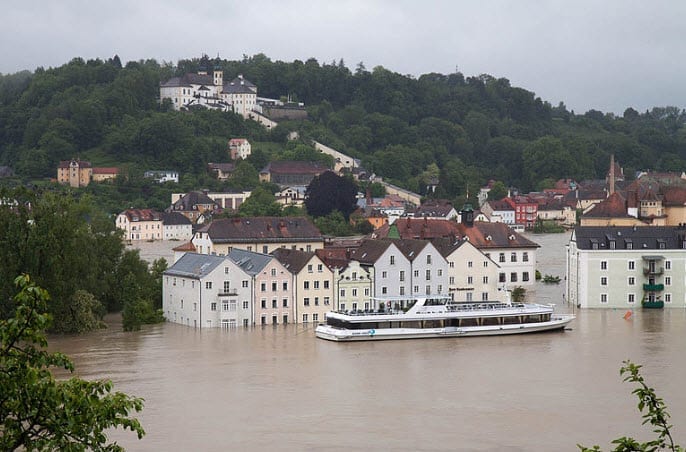 is reaching critical levels while the Moldau River is threatening the city’s historic center. A state of emergency has been declared in Prague and other areas including South and Central Bohemia, Plzeň, Liberec, Hradec Králové and Ústí. The Upa and Berounka rivers are also threatening several locations.

According to AIR, the heavy persistent rains are the result of a low pressure system called a Genoa Low Cyclogenesis, which developed over the eastern Adriatic Sea. From there it moved northwards towards the Eastern Alps bringing with it warm, moist air from the Black Sea. As this warm air mass collided with the colder air masses over northern Europe, it was lifted up and rain clouds developed. The system, named Frederik, remained over Central Europe for several days due to a very stable track but has now moved on towards southeast Europe.

According to AIR, the event has released an enormous amount of precipitation-in some areas as much as 400 liters per square meter within a few days. In Aschau-Stein, the precipitation rate reached 405 liters per square meter within 90 hours. Over the past 24 hours, over 90mm of rain has fallen in areas around Salzburg, Austria. In Germany, 61 river gauges (mostly in Bavaria, Thuringen, and Sachsen) are showing
levels above their highest flood warning levels. While the gauges along the Danube in Passau are inoperable, the flood waters have reached 12m, which is above the historical high set in 1954. Several tributaries are rising above the 100-year water level.

Saxony has received over 30mm of rain in the past 24 hours. The Elbe River has risen from its normal summer level of about 2m to 9.16m, well surpassing the 8.77m record of 1845, and is still rising rapidly. Flood levels at Blankenstein-Rosenthal are also rising, although the rain has abated.

This disaster has caused tens of thousands to evacuate their homes. Disruptions to infrastructure include flooded and blocked roads, and train tracks, along with power outages, and has hampered rescue efforts.

Southeastern Germany, particularly Passau, has borne the brunt of the damage due to the confluence of the Danube, Inn, and Ilz rivers, which have overwhelmed this city. In eastern Germany, floodwaters have submerged towns located along the Elbe. About 30,000 people have been evacuated from several areas around Dresden.

According to AIR, the predominant construction type for single family homes in Europe is masonry and around 90% of the homes in the countries affected by this event are of masonry construction, with the remainder usually being wood; a few are reinforced concrete. As most of the homes are one-story buildings, floods can damage a significant percentage of the building and its contents. The presence of a cellar increases the risk for contents damage, although heavily-used cellars often have better flood defenses than unfinished ones. In addition, apartment buildings in the affected regions are of masonry and reinforced concrete. Commercial buildings in all three of these countries are masonry or reinforced concrete, with masonry being the predominant type in Germany and Austria. Note that many buildings in Europe have mixed occupancies, with the ground floor used for shops while the upper floors are residential. Unlike single-family homes, these buildings often have a large degree of engineering and are built to stricter standards with sophisticated flood defenses, particularly in flood-prone areas.

The system’s track has moved into southeastern Europe. However, even as the rains abate, flooding will still worsen in areas as more water enters the river basins. The Elbe River is still rising and although rains have diminished in Saxony, the moist air will slow drying efforts. Landslides may continue to pose a threat due to the saturated ground and it will take several days for the floods to diminish.

AIR will continue to monitor the situation and will provide updates as warranted by events.