According to catastrophe modeling firm AIR Worldwide, heavy rainfall from June 19 to June 21 caused serious flooding across Southern Alberta, notably in Calgary. Roads and bridges were washed away; notably, the Trans-Canada Highway was damaged by mudslides west of Calgary. As of June 28, power has been restored to much of Calgary, and the Trans-Canada Highway has been repaired west of Calgary. However, many buildings in the affected area still have flooded basements, and cleanup efforts are anticipated to continue for some time.

According to AIR, starting the evening of Wednesday, June 19, torrential rains fell across Southern Alberta for several days, washing out bridges and roads, initiating mudslides, and inundating homes in many communities, including High River, Medicine Hat, and Canmore. Communities along the Bow, Elbow, South Saskatchewan, Red Deer, and Sheep Rivers were particularly hard-hit. In Calgary, Alberta’s largest city, the Bow River and the Elbow River overtopped their banks, causing severe flooding.

On Friday, June 21, 75,000 residents of Calgary were ordered to evacuate. As of June 24, 27 communities in Alberta were under a state of emergency. While the floodwaters have since largely receded across Southern Alberta, cleanup efforts are ongoing. 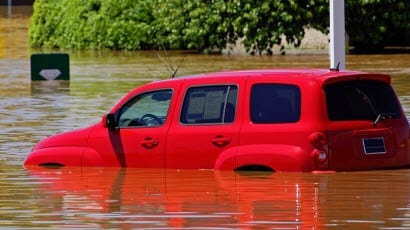 Dr. Tim Doggett, senior principal scientist at AIR Worldwide. “These extremely high levels of precipitation were produced by a chain of events that began with an unusual “blocked” jet stream pattern that developed across Western North America last week (which also caused record warm temperatures in
Alaska and Northern Canada). Next, a strong area of low pressure was trapped over southern Alberta by the blocked jet stream. A moist channel of air from the Gulf of Mexico was pulled northward by this low pressure system, colliding with the Rocky Mountains. As the air mass was pushed higher and higher, the air cooled and condensed, creating a large amount of precipitation (up to 200 mm of rain fell in
some areas).”

“These floods have been particularly severe because the ground was already saturated, as the spring in Southern Alberta has been unusually wet. In addition, in some locations, soils just 50 cm below the surface had not yet thawed, forcing the rainfall to flow downhill and enter rivers and streams rather than soaking into the ground.”

Local reports state that the flooding and its effects have been worse than the 2005 Calgary floods.

According to AIR, the predominant construction method of single family homes in the region is wood frame. Homes with basements are particularly at risk for contents damage. Apartment buildings and commercial buildings in the region comprise masonry and reinforced concrete. In contrast to single family homes (which are often wood frame structures), these buildings typically are built to stricter standards and may exhibit flood defenses.

Cleanup from the floods is underway and is expected to continue for some time, as many flooded buildings still have basements filled with water, and road and bridge repairs are ongoing. By June 24, the floodwaters in Calgary had receded, permitting people to return to their homes.

While many bridges in Southern Alberta were damaged by the flooding, the city of Calgary had conducted stability checks on all pedestrian and traffic bridges in the city, including the Bonnybrook Bridge.

Sections of the Canada Pacific Railway, which run near the bank of the Bow River in downtown Calgary, were damaged and remain closed as of June 28. Repairs are underway on other segments of the railway, including the lines extending west and south of the city.

AIR will continue to monitor the situation and will provide updates as warranted by events.