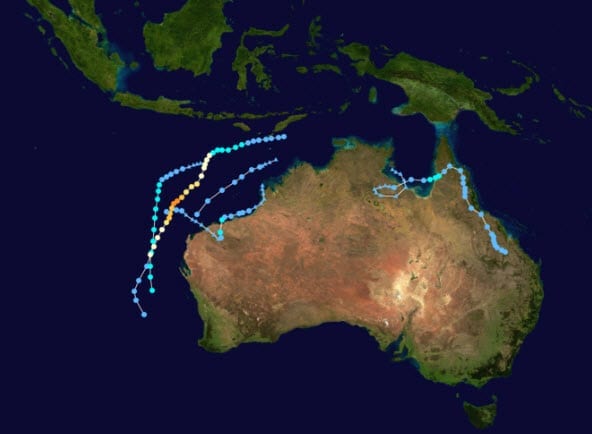 According to catastrophe modeling firm AIR Worldwide, flooding has hit parts of eastern Australia, forcing thousands of residents to evacuate their homes.

The heavy precipitation over the past week is associated with ex-tropical cyclone Oswald and was enhanced by a monsoon trough, an elongated area of low pressure that moved south along the Queensland coast into New South Wales. Floodwaters cut off rural communities, damaged homes, caused massive power outages, and disrupted coal mining operations. Water levels are slowly receding on most rivers, but dozens of flood warnings still remain in effect across the region.

“The remnants of Cyclone Oswald, which formed in the Gulf of Carpentaria in northern Australia 11 days ago, have dumped copious amounts of rainfall both near its landfall location and along an extended stretch of the eastern coast of Australia,” said Dr. Peter Sousounis, senior principal atmospheric scientist at AIR Worldwide. “Despite weakening below tropical cyclone status, heavy rainfall has been observed along the entire east coast as the slow moving system, enhanced by a monsoon trough, tracked south and east along the coast.”

According to NASA’s Tropical Rainfall Measuring Mission (TRMM) satellite, ex-tropical cyclone Oswald has dropped over 600 mm (~23.6 inches) of rain in areas of the Cape York Peninsula where Oswald initially made landfall. As the remnants tracked south, heavy rainfall has continued along the coast, with more than 300 mm observed over portions of northern Queensland, and more than 400 mm north of Brisbane in southern Queensland.

Rainfall in the coastal Queensland city of Gladstone exceeded its previous monthly record in just four days, reaching 819.8 mm. Another four-day rainfall record was set in the Tweed Catchment of the Upper Rous River in New South Wales, where 1027 mm was recorded between January 26 and January 29.

Sousounis noted, “The most severe of the flooding occurred in the Burnett River catchment area near the Queensland coast. River levels exceeded 9.5 meters, surpassing the height reached during the last significant flood in December of 2010 by 1.5 meters. The city of Bundaberg (estimated population of 71,000) experienced its worst flooding in recorded history, with 2000 homes and 200 businesses reportedly affected by floodwaters.”

The impact on the capital of Queensland, Brisbane, approximately 370 km south of Bundaberg, was less severe than feared as the Brisbane River peaked to 2.2 meters, nearly half a meter lower than predicted. Minor flooding occurred in low-lying areas of the central business district, but thus far, no flooding above the floorboard has been reported. The flooding, however, has forced a water treatment facility to shut down, causing a water shortage in the city and in surrounding suburbs. In 2011, approximately 22,000 homes were flooded in Brisbane as the Brisbane River reached a height of nearly 4.5 meters.

“Southwest of Brisbane, residents of the town of Ipswich anxiously watched as water levels on the Bremer River rose, peaking to a height of 13.9 meters on Monday night. This was far below the January 2011 height of 19.4 meters, and the town was spared from significant flooding.”

Farther south, in the town of Grafton in New South Wales, the Clarence River rose to a peak of more than 8 meters, the highest since recordkeeping began in 1839. Effective flood defense mechanisms, however, have thus far protected most communities in New South Wales from significant flooding. Sydney is not expected to be affected by the flooding.

According to AIR, these latest floods are reminiscent of the devastating 2010-2011 Queensland floods, but the impact is expected to be far less severe. Two years ago, floods covered more than half of the state, and economic losses were estimated at AUD 30 billion. Insured losses totaled AUD 2.4 billion resulting from an estimated 60,000 claims. As of June 2012, The Insurance Council of Australia (ICA) reports that approximately 65% of homeowner’s policies in Queensland and 77% of policies nationwide include coverage for flood.

As water levels recede, the most severe of the flooding appears to have passed.

AIR will continue to monitor the situation in eastern Australia and will provide updates if warranted.