This situation is starting to cause concern for officials in the state, where sea levels are a growing problem.

Property owners along the seaside and riverside in the state are facing a double level of concern regarding the rising sea levels and the cost of coastal home insurance that is going along with it.

The damage caused by Superstorm Sandy is being used as an example of what Massachusetts could one day see. 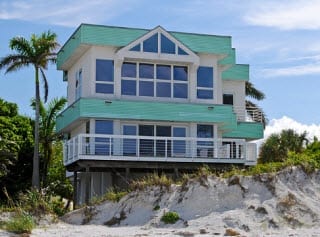 Although the majority of the damage along the coastline was to New York City and New Jersey, the state of Massachusetts is seeing it as a sign of what could one day come their way, and coastal home insurance rates are already starting to reflect that threat. They are on their way up and while some have already implemented their increases, more are sure to be on their way.

Officials in the state are now concerned about the long term impact of these coastal home insurance rates.

This, could have a considerable effect on the tax collections, property values, and even construction business within the region. According to Rep. James Cantwell (D-Marshfield), “It’s hurting our Massachusetts builders. It’s hurting our Massachusetts Realtors”. Cantwell has assumed a leadership role in addressing some of the primary challenges to the federal insurance changes. He explained that residents aren’t capable of even selling their properties as nobody is interested in buying due to the uncertainty regarding what their flood coverage rates will be.

Commercial coverage rates have also been climbing as a result of predictions that have been coming in with regards to the rising sea levels and worries that there will be more frequent large storms like Sandy. The National Hurricane Center has reported that Sandy was the second most expensive storm in the history of the country, with 2005’s Hurricane Katrina generating the highest totals.

According to meteorologists, if Sandy had managed to make its way farther north, and if it had been high tide when it struck Massachusetts, then both the South Shore and Boston would still be in recovery from the damage. This has sent coastal home insurance rates skyward while causing notable harm to the real estate industry in the region.