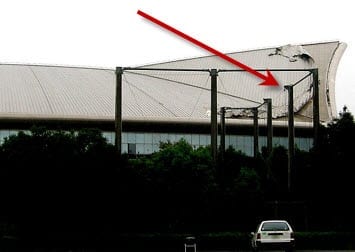 “Tropical Storm Talas came ashore at Kochi Prefecture on Japan’s Shikoku island-the smallest and least populated of the country’s four main islands-at roughly 6 am local time Saturday, September 3,” said Dr. Peter Sousounis, principal scientist at AIR Worldwide. “Overnight on Saturday, the slow-moving storm crossed the southern island of Shikoku and the central part of the main island of Honshu, passing near the cities of Kobe, Osaka, and Kyoto, all the while delivering heavy rain. Record rainfall fell on central and western Japan and wide sections of the country experienced damaging winds. On Monday, September 5, Talas finally moved offshore into the Sea of Japan.”

Though a weak storm at landfall, Talas was unusually large, with tropical storm force winds extending outwards up to 600 kilometers. According to current measurements from Tropical Rainfall Measuring Mission satellites, total accumulated precipitation of 100-200 mm impacted much of Japan, while higher amounts of 1,600 mm impacted a mountainous area in the prefecture of Nara. The storm was record-setting: it broke Japan’s previous rainfall record (1,322 millimeters, set in September of 2005 in a town in Miyazaki Prefecture) and exceeded the yearly average of precipitation that falls over the city of Tokyo.

“After making landfall, Talas moved into an area of moderate wind shear (15-20 knots); this shear-located along the western edge of a deep-layered subtropical ridge-slowed the storm considerably,” continued Dr. Sousounis. “Since Talas was slow-moving, taking a full day to track across Japan, which is almost twice as long as had been forecast, its heavy precipitation was particularly damaging. Indeed, the decreased forward speed alone can account for an increase in precipitation totals by a factor of two, in certain locations. Further exacerbating the precipitation damage from this storm was an elongation of its cloud mass to the northeast, as well as its interaction with an approaching mid-latitude front.”

Though certainly damaging, Talas is not as destructive (nor as deadly) as another “wet” typhoon to come ashore on Shikoku Island in recent history; in 2004, Typhoon Tokage, which tracked east of where Talas tracked this weekend, caused 95 deaths from high winds, flooding and mudslides. The storm also flooded more than 14,000 homes above first floor level, according to the FDMA. Losses from Talas are not expected to be as high as those from Tokage, which AIR estimates would cause insured losses exceeding JPY 186.9 billion if it were to occur today.

According to AIR, Japan has strict and well-enforced construction codes; modern structures withstood Talas’ forecast wind speeds with minimal damage, again, making the primary concern from Tropical Storm Talas flood damage. Flood damage in Japan is not automatically included in wind policies. In typical flood policies here, a specified payout is made only when the actual damage falls within a specified range.

According to AIR, the vulnerability of buildings to flood damage varies by construction type. For a given flood depth, a residential wood-frame building is expected to sustain more damage than a residential masonry building. Concrete construction is less vulnerable to flood than steel or masonry. Commercial and apartment buildings usually have stronger foundations than residential buildings, and are thus better able to resist flood loads.

Flood vulnerability also varies by building height. Because damage is usually limited to the lower stories of a building, high-rise buildings will experience a lower damage ratio-the ratio of the repair cost and the total replacement value of the building-than low-rise buildings because a smaller proportion of the building is affected.

Due to Talas’s unexpected slow forward motion across Japan, precipitation and the resultant flooding were more significant than had been forecast last week.